With a General Election coming on 12 December, it’s important that every voter has information to hand about the situation in our National Health Service. With the media fixated elsewhere, it’s up to us to make sure that the NHS is on every voter’s mind as they enter the polling booth – so here are ten things you should know:

1) The Prime Minister is lying – he offers no “extra funds”

Boris Johnson has suggested he will end the long decade of austerity in our NHS – but his promises fall apart under scrutiny.

In August, he pledged £1.8 billion “extra” funding for NHS hospitals. As health workers, analysts and campaigners quickly pointed out, the “new” money wasn’t new at all – it was mostly transferred or recycled from other parts of the NHS budget. In any case, £1.8 billion would only reverse a tiny part of 10 years of cuts – a “drop in the ocean”, in the words of Ben Gershlick, Senior Economist at the Health Foundation.

In other words, Johnson is giving with one hand and taking with the other.

2) Much of the NHS is collapsing – literally

Another promise from Johnson in recent months was the pledge to “build 40 new hospitals.” Very soon observers were pointing out that the money proposed was nowhere near enough to deliver, and the offer shifted to an “upgrading” of 20 existing hospitals.  Eventually, the promise was quietly rolled back to some building works at six existing hospitals.

This tawdry back-and-forth is taking place against the backdrop of an NHS which is quite literally falling to bits. For years, hospitals have been ordered to divert money from their “capital” budgets – intended for building works – to make up for cuts to their day-to-day staffing and operational funds. The result is decrepit, unhygienic buildings and infrastructure: 94% of NHS bosses surveyed have said the state of their buildings is so bad as to endanger patient safety. This is even the case in the Prime Minister’s own constituency, where Hillingdon Hospital has decayed so badly that child patients were evacuated recently for reasons of safety.

In the face of massive public opposition, the Prime Minister has publicly disavowed the prospect of the NHS being laid open to US private healthcare interests in a future trade deal with Donald Trump’s government. The reality, however, is that US private firms already have lots of contracts with the NHS and are queuing up to take on support services for the integrated care systems that will decide how limited amounts of money can be spent and what services should be cut. In fact, while Johnson says one thing to voters, his government is saying the opposite to its US “partners”.

A recent Channel 4 Dispatches programme revealed that government officials are already having face-to-face meetings with US contacts, including representatives of the powerful and exploitative US pharmaceutical industry, about a deal involving drug price hikes and restrictive practices. A trade deal with the US is still Johnson’s only plan for how to reorient the UK economy after Brexit.

If Johnson has to tread carefully for fear of public opinion, his friends in corporate America and in the right-wing Trump Administration are far more open: again and again, they have expressed their desire to break up Britain’s “socialised system”, so that patients here can be charged sky-high prices for basic medications.

Small wonder that only 31% of the public believe that Johnson is telling the truth about his US liaison and our NHS.

4) The NHS is now critically under-staffed

Ten years of destructive cuts have left our NHS short of 100,000 hospital and community staff, including 40,000 nurses and 10,000 hospital doctors, and a further 7000 GPs. The impacts of this are obvious: longer waiting times and a service that runs on the goodwill of self-sacrificing staff. A majority (58%) of NHS workers do unpaid extra hours every single week to keep services afloat.

5) Health workers are under attack and stretched to breaking point

Instead of giving NHS workers the resources they need to deliver services, government ministers for the last decade have set staff up for failure with impossible targets and have undermined morale using blame games and division tactics. They aim to deflect responsibility for their own destructive policies.

The impacts are clear in the latest NHS Staff Survey: 78% of NHS workers feel under unrealistic pressure in their work; more than half want to leave their current job; and a fifth want to leave the NHS altogether. Shockingly, the suicides of hundreds of nurses and doctors are well above the national average. 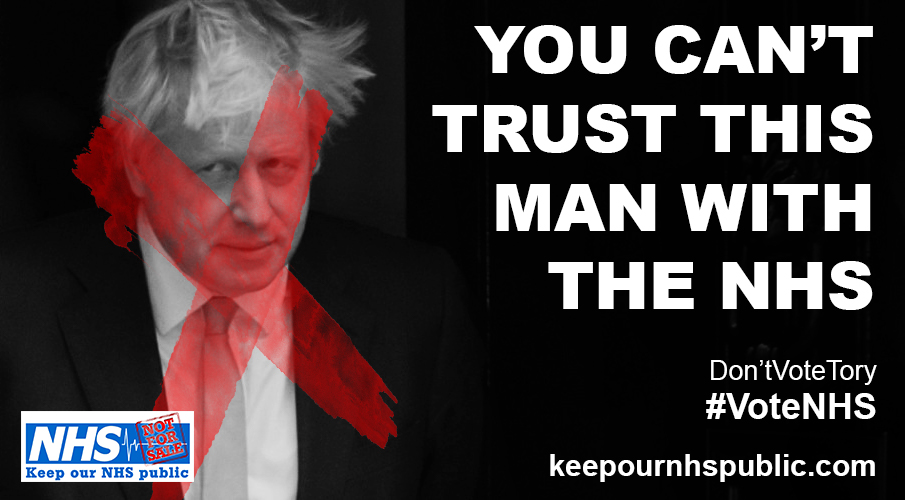 The Health and Social Care Act 2012 had a single purpose: to force the opening-up of all NHS services to private healthcare providers. While the NHS remains in place and the vast majority of healthcare is still publicly funded, 18% of the NHS budget goes to the private sector; private providers now control many services and extract a profit from running them, diverting money away from patient care. And haemorrhaging of NHS funding to private providers is rising fast.

Private firms are getting bolder and bolder in trying to grab hold of NHS contracts and NHS funding - often with the help of government-appointed national NHS managers. One shocking example this year was the decision by NHS England to force through a private contract to take over specialised NHS cancer PET-CT scanning in Oxfordshire, riding roughshod over the clear opposition of local patients, health commissioners and elected councillors. In some cases, we've even seen private providers try to sue the NHS for refusing to renew their lucrative contracts after years of malpractice.

7) The “Hostile Environment” is hurting, not helping, our NHS

In 2015, the government introduced charges for migrant patients using most NHS services, and required NHS trusts and health workers to check patients’ IDs and administer these charges. This was an extension to the NHS of the “Hostile Environment”, a set of policies designed to force workers across the public sector to act as border guards and monitor service users’ migration status.

Four years on, it is clear that these policies can be lethal to migrant patients. On 23 October, health workers across the country protested  the two-year anniversary of the introduction of up-front charges, and held vigils for those who have lost their lives after being denied essential healthcare under these policies.

Voters should also be aware that such policies are devastating to the NHS itself, in at least two respects: they damage staff morale and the spirit of solidarity which are essential to the service; and they alienate and undermine the huge number of migrant health workers who are key to the NHS’ success, without whom the whole service would grind to a halt.

8) There is no plan for social care

Britain’s social care system is badly broken and needs a radical overhaul. £8bn has been stripped from annual budgets and over 1 million people in need no longer received personal social care. Many agree that integrating social care with healthcare would be desirable – but in practice, the government is running down healthcare towards the level of under-funded, piecemeal social care provision, rather than moving forward to a comprehensive social care system on the model of the NHS.

"We will fix the crisis in social care once and for all, and with a clear plan we have prepared to give every older person the dignity and security they deserve."

As with so much else, however, the Prime Minister has given no details of his supposed “clear plan”. Given his party’s previous attempt to instate a “dementia tax” on social care users, we should be wary about the exact nature of Boris Johnson’s solution, especially as he has not yet seen fit to share it with the public.

In 2018, suicides in the UK jumped a horrifying 11.8% from the previous year’s total, reaching their highest level in 20 years; tragically, over 200 school-age children, and 730 young people more broadly, were among those who took their own lives. It’s no secret that the severe shortage of mental healthcare services and the withdrawal of welfare and basic public services from vulnerable individuals have done much to exacerbate the crisis.

During Theresa May’s tenure, Keep Our NHS Public was among many critics who pointed out that her warm words and apparently understanding statements around mental health stigma did not prevent her from cutting vital frontline services for people in need. Under Johnson, it seems that even the appearance of a caring approach has now disappeared, with the new Prime Minister asserting, that “hard work” is the cure to mental health problems.

The brutal reality is that the mental health crisis will carry on until Johnson and his party are replaced in government.

10) The current state of the NHS is the outcome of government policy. It doesn’t have to be like this.

The last ten years have seen a ruthless and dogmatic drive from Westminster for austerity policies across the public sector, including in our NHS. As a widely-loved symbol of the welfare state and the limits of profit-making in our society, the NHS is a fundamental challenge to Conservative ideology that holds that the "free market" is the ultimate route to prosperity and wellbeing. The economic logic behind austerity has been debunked by mainstream economists. Yet UK government austerity measures  have been implicated directly as a contributory cause of 130,000 ‘preventable’ deaths - and austerity grinds on.

Some of the most vocal advocates of this perspective have been the very Tory politicians put in charge of the NHS over the last ten years. For example, former Health Secretary Jeremy Hunt co-authored an entire book which called for the NHS to be replaced with private insurance; Boris Johnson himself argued, before his entrance into front-bench politics, that there was a "moral [and] economic" need to charge for healthcare; and Andrew Lansley, the Health Secretary who oversaw the Health and Social Care Act, now works for several different private healthcare and pharmaceutical companies.

Politicians have often made the case for privatisation by suggesting that the NHS is inefficient and consumes huge amounts of funding compared to systems that feature more private health provision. The truth is that the UK spends less on healthcare than most other comparable governments. We now have a 10-year Long Term Plan for the NHS that breaks the national service into 44 pieces and is focused on cost containment through cuts, and reducing accountability through promoting Integrated Care Systems. The newly merging super-CCGs have the potential to award a contract for integrated care systems to a single Integrated Care Provider, along the lines of ACOs with a fixed budget and run under a single long-term contract that could be held by a private company. And this we will oppose all the way

Commercialisation of the NHS, with commissioning of contracts and the expansion of private sector interests, is responsible for at least £4.5bn and possibly up to £15bn or more per year in avoidable costs. There is no reason we can't have world-class healthcare, but we can't achieve it with scant resources and funding haemorrhaging away wastefully. We need a change of government to get the profit-seeking firms out of our healthcare system and give health workers the support and resources that they need to succeed. That's why we're saying: